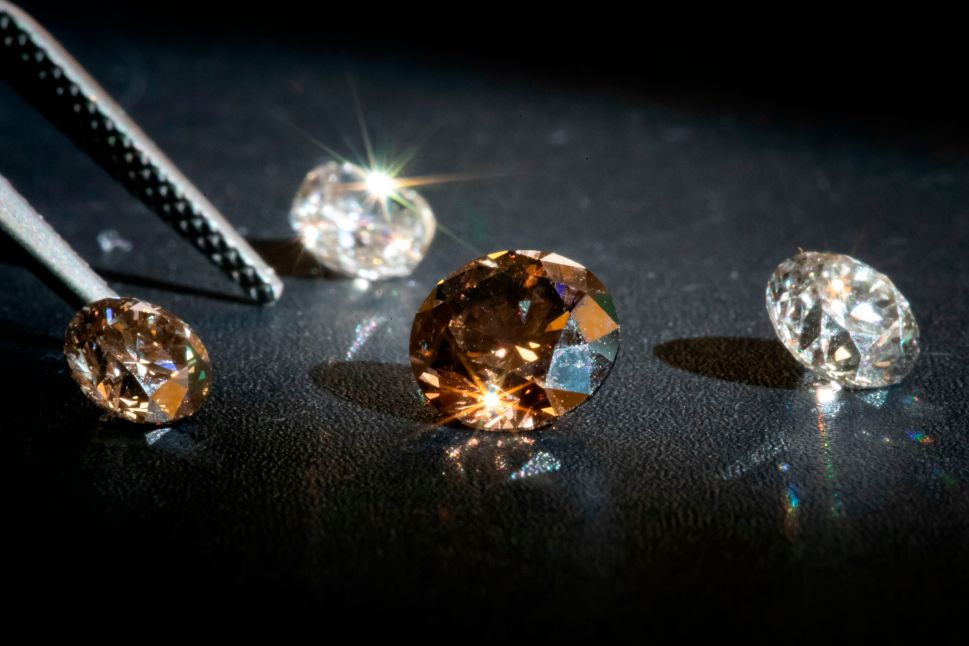 Every woman (and really every man, too) has a diamond problem—an inability to resist that shine and sparkle of the hard carbon mineral and the concept of love, commitment and social status it represents. Although it has been repeatedly proven that this century-old obsession is all but make-believe, fueled by advertising slogans like “A Diamond is Forever,” and that the precious stone is actually neither as scarce as its price tag suggests nor as indestructible as its sellers claim, three in four women in America still want a diamond on their ring finger on their engagement day.

The diamond industry has, for over a century, been portrayed by media as an evil monopoly, in which a handful of mining giants manipulate the supply and demand (and hence the price) while blindly ignoring the high environmental and humanitarian costs associated with their business. But over the last few years, the diamond cartel has seen a crop of challengers who offer a formidable alternative: lab-grown diamonds that are chemically and physically identical to their natural counterparts but much cheaper and friendlier to the environment.

The pioneers in this nascent product category are an interesting mix from both Silicon Valley’s tech hub and “old money” mine owners, including De Beers Group, the world’s largest diamond company that invented the famous motto, “A Diamond is Forever.” There’s a general consensus among these companies that the diamond industry is overdue for a disruption as lab technology matures and Millennial and Gen Z consumers increasingly gravitate toward businesses that prioritize sustainability and social responsibility.

“I was really done with the diamond business. I just felt it’s on the wrong side of history,” Alex Weindling, a third-generation jeweler whose grandfather owned diamond mines in Africa, said of founding Great Heights, an online store selling lab-grown diamonds, in 2019. “My mother said if you don’t have anything good to say, say nothing. So I have nothing to say about the mines.”

“We are seeking to set the standard for diamonds at large,” said Martin Roscheisen, CEO of San Francisco-based Diamond Foundry, a five-year-old startup backed by celebrities like Leonardo DiCaprio. “This includes bringing transparency to a traditionally intentionally opaque industry… and market-based pricing that does not follow cartel pricing.”

Lab-grown diamonds are carbon synthesized under extreme heat and pressure using a process known as chemical vapor deposition that mimics the geological formation of diamonds deep down in the Earth’s mantle. They are, by any scientific measure, real diamonds. But putting them in store windows and marketing as if they are absolutely equal to natural diamonds, as some lab-grown diamond companies have found, is, so far, a hard story to sell to consumers. 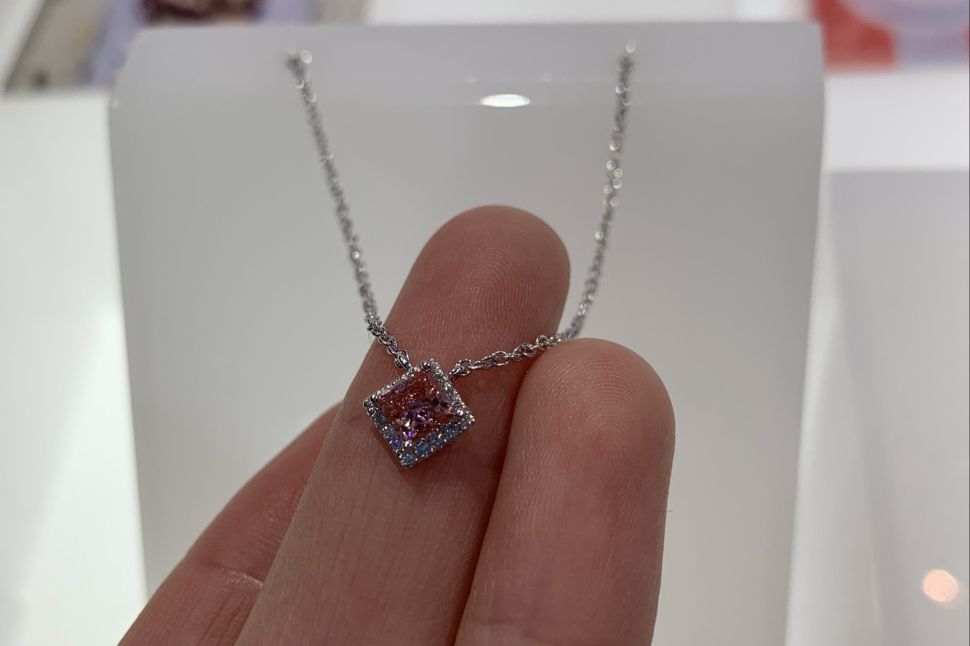 A pink lab-grown diamond pendant in the Lightbox pop-up store in New York City in December 2018. Sissi Cao for Observer

Lightbox, a subsidiary of De Beers that launched in 2018, for example, makes an intentional effort to avoid the engagement ring space. “Our market research shows that consumers still have a strong preference in natural diamonds for milestone events like an engagement,” CEO Steve Coe told Observer. “When they saw lab-grown diamonds, they basically thought that it looked great. There was a lot of interest in that for everyday gifting occasions, like birthdays or the first luxury jewelry for a teenage daughter.”

Based on those findings, Lightbox decided to sell colored diamond earrings, pendants and bracelets priced at between $500 and $1,000, a price point Coe said “lots of women would happily spend on a handbag or a pair of special-occasion shoes.”

Lightbox’s lab-grown diamonds sell for about $800 per carat. A one-carat natural diamond sells for an average of $11,500 on the wholesale market (price can vary greatly depending on quality factors including shape, polish and 4Cs), according to the Diamond Search Engine.

In fact, Lightbox’s price sounded so good that some of its rivals were convinced that it was simply impossible. Chatham Created Gems Inc., a San Marcos, Calif.-based lab-grown diamond seller, for one, has accused the De Beers-owned brand of predatory pricing. “De Beers aren’t stupid,” Chatham CEO Tom Chatham said in an interview with Bloomberg in September 2018, shortly after Lightbox’s launch. “They know how to grow diamonds, but this equipment is not cheap. They are selling below cost.”

Coe denied this accusation outright. “That’s absolutely not true,” he told Observer. “I can assure you that all our products [are sold] above cost.” The CEO explained that part of the reason Lightbox is able to price its products at those levels is because it sources technology and raw material from Element Six, another subsidiary under De Beers with decades of experience producing industrial-grade lab-grown diamonds. 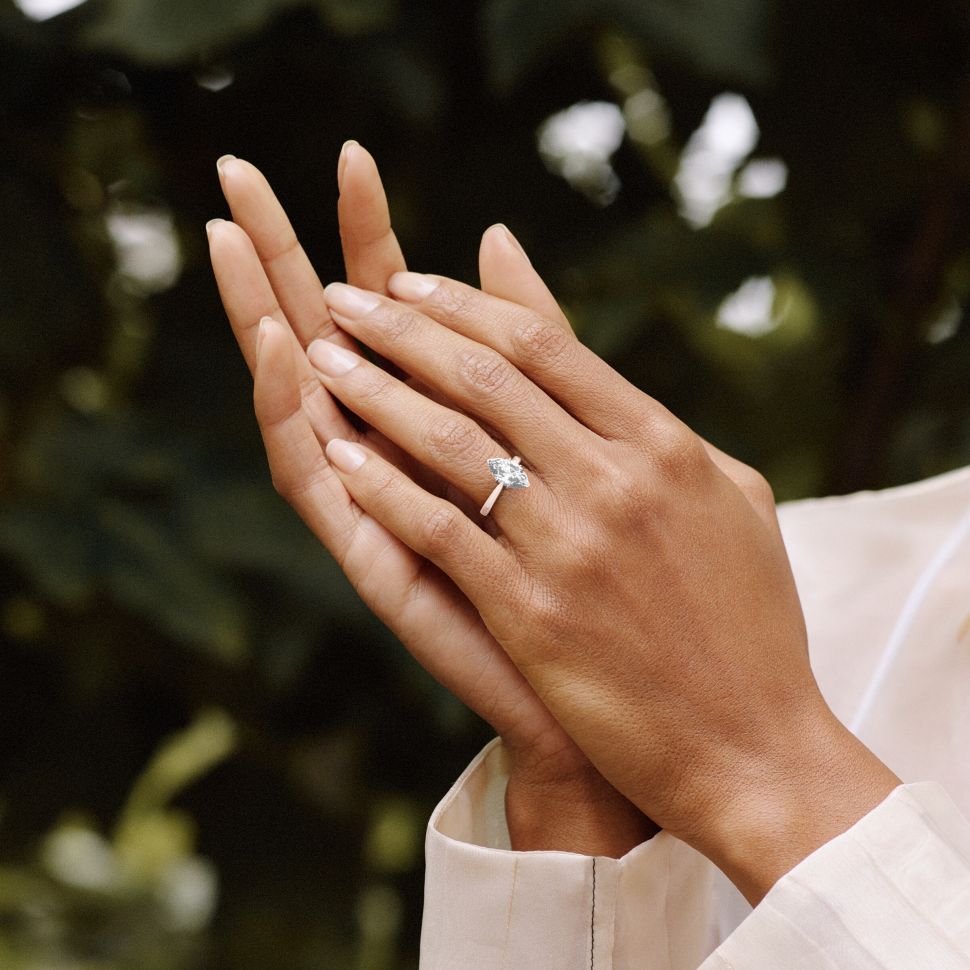 On the other end of the product proposition spectrum, New York-based Great Heights chose to tackle the engagement ring space on purpose, betting on its industry-experienced founders’ belief that it’s just a matter of time before consumers part ways with mined diamonds and embrace their lab-created equals.

“Consumers have finally seen through the bullshit that the mining companies have been shoving down their parent’s throats,” said CEO and co-founder Weindling. “It’s not worth continuing to hammer the Earth and dig craters so large they’re visible from the upper atmosphere to get at [diamonds].”

Great Heights’ playbook is, rather than just selling on price advantage and moral correctness, presenting its products in a way young couples would understand. “Every other company selling diamond rings online is using a very old experience that hasn’t changed since the ’90s,” said co-founder Ryan Bonifacino.

Powered by the branding team behind Gen Z-favorite brands, like Casper and Allbirds, and the CGI team behind Game of Thrones, Great Heights boasts an elegant online storefront featuring a full customization process and a preview tool that Bonifacino declared as “a first for the entire industry to design that level of realness in a computer-generated image with that level of personalization.”

But I still have a question: if the whole diamond obsession is based on a marketing scheme peddled by greedy cartels and maybe diamonds are not even worth owning in the first place, then what’s the point of making a lab-made version of it?

“The allure of diamonds is only increasing. The percentage of marriages accompanied by a diamond ring keeps going up,” said Diamond Foundry CEO Roscheisen. “Clearly the Tinder generation values commitment as much as ever before. Commitment will always remain a scarcity as it is bound by human limitations, and ever more so in an age of ever more distractions.”

“Do you own a diamond?” Weindling asked me.

“Wait until one day someone puts one on your finger and you will understand,” he said. “I know that sounds like garbage, but I have to tell you, they’re so incredibly beautiful. Nothing sparkles like a diamond. Nothing.”